What is tai chi?

Tai chi Is to China traditional philosophy of Confucianism and Taoism in Tai Chi, yin and Yang dialectical philosophy as the core idea, the functions of maintenance of temperament, physical fitness, martial arts Sanda etc. as a whole, with the changes of yin and Yang and the five elements of learning, meridian, guidance and tonalide operation to form a Neiwaijianxiu, soft, slow and flexible and the traditional arts of ancient China move among force and soft.

Tai chi (Mandarin: tàijí 太極, an abbreviation of tàijí quán 太極拳, literally "Supreme Ultimate Boxing") is an internal Chinese martial art 武术 practiced for both its defense training and its health benefits. Though originally conceived as a martial art, it is also typically practiced for a variety of other personal reasons: competitive wrestling in the format of pushing hands (tui shou), demonstration competitions, and achieving greater longevity. As a result, a multitude of training forms exist, both traditional and modern, which correspond to those aims with differing emphasis. Some training forms of t'ai chi ch'uan are especially known for being practiced with relatively slow movements.

Today, t'ai chi ch'uan has spread worldwide. Most modern styles of t'ai chi ch'uan trace their development to at least one of the five traditional schools: Chen, Yang, Wu (Hao), Wu, and Sun. 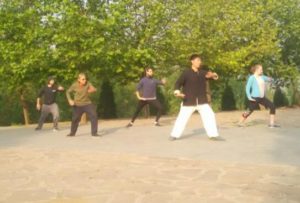 Taiji (the `supreme ultimate` school) was derived from Wuji ('emptiness'; the `non-ultimate` school) and composed of two different states (liang yi)Yin and Yang. From Liang Yi came sancai (the 'three components') and sixiang (the 'four kinds of appearances'). Bagua (Eight Symbols) also came from sixiang. Tai Chi is often thought of as being quintessential of China, entailing the principles of Yin and Yang from the I Ching, (the Book of Changes), rooted in Chinese medicine (meridians and specific names of vessels), with the meditative aspect of it's practice in focusing on the breath. Tai Chi is a comprehensive study and characterized by the interaction of the energies of Yin and Yang. It's creation brought together an understanding of the laws of the human body with those of nature- alternating force and flexibility with swiftness and slowness.

Tai Chi follows the principle of Yin and Yang, the attack process focuses the inviting combined with the breaking up. During attack and defense, you sense the opposite force and force's direction by the ability to sense and break up the coming force. Using the force received to defend, ie. changes of move following the opposite changes.
The basic actions of Tai Chi are tightening, quivering, stroking, squeezing, elbowing, shoving, advancing, receding, considering, waiting, and stillness.

Every act is slow and relaxing. In Tai Chi drill, one should straighten back and waist, draw in the jaw, and droop the shoulder, with a feeling of flying across the clouds. A certain boxer in the Qing Dynasty once said of Tai Chi "act as the wave of the sea, torrential and never-failing."

Tai chi chuan 's martial aspect relies on sensitivity to the opponent's movements and centre of gravity dictating appropriate responses. Effectively affecting or "capturing" the opponent's centre of gravity immediately upon contact, is trained as the primary goal of the martial t'ai chi ch'uan student.[8] The sensitivity needed to capture the centre is acquired over thousands of hours of first yin (slow, repetitive, meditative, low-impact) and then later adding yang ("realistic," active, fast, high-impact) martial training through taolu ("forms"), tuishou ("pushing hands"), and sanshou ("sparring"). T'ai chi ch'uan trains in three basic ranges: close, medium and long, and then everything in between. Pushes and open-hand strikes are more common than punches, and kicks are usually to the legs and lower torso, never higher than the hip, depending on style. The fingers, fists, palms, sides of the hands, wrists, forearms, elbows, shoulders, back, hips, knees, and feet are commonly used to strike, with strikes to the eyes, throat, heart, groin, and other acupressure points trained by advanced students. Chin na, which are joint traps, locks, and breaks are also used. Most t'ai chi ch'uan teachers expect their students to thoroughly learn defensive or neutralizing skills first, and a student will have to demonstrate proficiency with them before offensive skills will be extensively trained.

What does Tai Chi do for your body?

Who can do tai chi?

Tai chi is low impact and puts minimal stress on muscles and joints, making it generally safe for all ages and fitness levels. In fact, because tai chi is a low-impact exercise, it may be especially suitable if you're an older adult who otherwise may not exercise.

In addition to the physical form, martial t'ai chi ch'uan schools also focus on how the energy of a strike affects the other person. A palm strike that looks to have the same movement may be performed in such a way that it has a completely different effect on the target's body. A palm strike that could simply push the opponent backward, could instead be focused in such a way as to lift the opponent vertically off the ground, breaking his/her centre of gravity; or that it could terminate the force of the strike within the other person's body with the intent of causing internal damage.

Most aspects of a trainee's t'ai chi ch'uan development are meant to be covered within the partnered practice of tuishou, and so, sanshou ("sparring") is not as commonly used as a method of training, but more advanced students sometimes do practice by sanshou. Sanshou is more common to tournaments such as wushu tournaments.

What You Get From Your Tai Chi Training ?

Tai Chi at the same time also pays much attention of the training of Qi and breath control. Qi is to refine human's mentality and lies at the heart of Tai Chi as with other forms of internal Kungfu.

How to Start Your Tai Chi Training?

Coming to the Taizu Kung Fu School to start your Tai Chi Training is easy.

If you would like to train at the Taizu Shaolin Kung Fu International School just fill in the application form , A member of our schools team will contact you.

Once your application has been approved we will confirm your place at our school and prepare your arrival documents.

We will also provide you with details of how to get to our school and will always be on hand should you need any help or advice!

Need more info before you apply? Get in touch